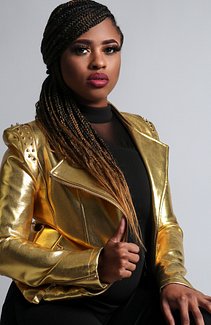 Deseray is far from your normal Gospel Artist she expresses her love for God and music in a different way! She doesn't  underestimate the gift that God has placed in her care and she believes you shouldn't either.

THE START OF IT ALL!

Deseray Thomas was born and raised in Montgomery, AL. She was raised in the faith by hard working parents who were active in their local church. She was gifted to hear and duplicate the sounds that she heard through music. As she studied the vocal patterns of others, she tried doing the same until it was mastered, then making it her own.

Deseray was given the gift of visions and dreams, first seeing her future at 12 years old. Shortly after, at the age of thirteen, she was spiritually attacked by fear, depression, and anxiety. Unfortunately, this left her feeling inadequate, incapable, and second guessing who God had called her to be. She became silenced and felt like all hope was lost, trying to take her own life several times. Many times she would cry out, but it seemed that no one was listening. This allowed God to step in heavily and speak his beautiful truth and love into her so when all else failed, she knew that God wouldn't. Deseray came out of that season and began telling anyone she could about Jesus.

As Deseray began intently studying the Word, God began birthing songs and melodies through her; for his glory. As she grew in ministry, she became the minister of music for a local church, and music director of a faith-based production company.

Deseray is a wife and mother of three beautiful children. She continues to present the gospel through song and word at every opportunity. She is used in several productions, from stage plays and concerts, to music videos and beyond. She has had the opportunity to sing with or open up for several headline worshipers like Tremaine Hawkins, Bryan Cage, J.J Harrison, Micah Stamply, Cathy Taylor, and many more. She continues to open her mouth and testify of God's goodness and glory anywhere goes.